Needing two incompatible version of the same library  can be an evil problem, and a recent paper pointed out that solving it was NP-complete.

“DLL hell” has been a problem in Windows and many of the free and commercial Unixes. Interestingly, it was recognized and fixed in Multics, but then reproduced in both Unix and Windows, and finally re-fixed in SunOS 5. More recently, it was fixed in part in Linux glibc.

This is the story of how.

Last week, I had the pleasure of reading about Kristoffer Grönlund’s 2017 linux.conf.au talk, Package managers all the way down , about the recurring problems of package managers for both operating systems and language families. 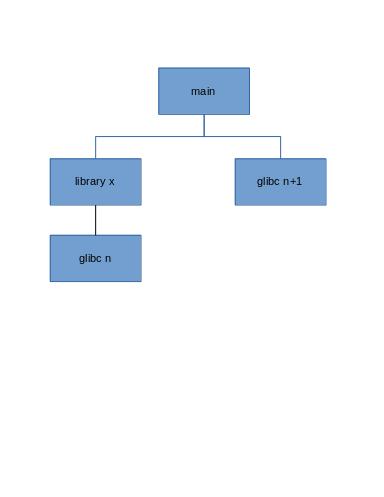 DLL hell is back, and hitting multi-language projects like Hawk as well as language-specific tools like npm.

Russ Cox investigated the problem, and wrote well-known paper that opens with “Dependency hell is NP-complete. But maybe we can climb out.”

The problem is that a program that use libraries can end up needing two different versions of a subordinate library. For example, I might write a main program that uses glibc n+1, but from it call a library that requires glibc n.

If your system can’t load both, you can’t link.

In principle, you can design a linker that can load both versions: the Rust language and the and the Nix package manager have addressed that approach, at the expense of managing a large and ambiguous symbol space.

A elegant idea, however, is to version-number the individual interfaces, and keep both old and new interfaces in the libraries. When you update a library, you get new interfaces and bug-fixes, but you also gets the backwards-compatibility of having the “old” interface in the same file.  Of course, it isn’t always a complete copy of the old versions: often it’s a “downdater” that calls the new one with different parameters, or an “updater” that wraps the old code in a function with additional capabilities.

The idea of having only one copy of a library on the system and keeping old versions of calls came originally from Multics: Paul Stachour wrote about their hardware and software versioning in You Don’t Know Jack About Software Maintenance. It that era, they did continuous delivery, something which required backwards compatibility: they just called it continuous maintenance.

On Unix, that degree of complexity was undesirable: the early Unixes did not link dynamically and the number of libraries was small, so it was hard to have the problem.

Systems with lots of shared libraries and products depending on them, however, made us aware of it once more. Windows gave us the name “DLL hell”, and we promptly recreated it in  SunOS 4, as did the other Unix vendors.  For SunOS 5, my team under David J Brown then recreated the fix, and later discovered that the glibc team had done so too. David described both in a Usenix talk, Library Interface Versioning in Solaris and Linux.

We needed to do so because we had a “compatibility guarantee”. If your program ran and passed the “appcert” script, then we warranted it would run on all newer Solaris versions. If it didn’t, that was our fault, and ours to fix. Failing to fix DLL hell would have cost us significant money!

In Linux, Linus make a similar guarantee, to not break running programs. It too is hard, but manageable inside a mostly-static kernel of moderate size. It’s harder in the application world.

Assume my main-program and a library both call memcpy. My program makes sure that the source and target don’t overlap, so it can use the default memcpy.  However, the library does do overlappped copies, and blithely assumed that memcpy did pure left-to-right copying. That’s no longer true, so the library is linked to  a specific memcpy, memcpy@GLIBC_2.2.5, which does make that guarantee. That interface is “downdated” to do strict left-to-right copying by being turned into a call to memmove instead of to the newest memcpy.

To ensure this, the compiler and linker need to be sensitive to the versions needed, and insert the equivalent of “.symver memcpy, memcpy@GLIBC_2.2.5” into the linkage process, using the rules described in David J. Brown’s paper to choose a version old enough to guarantee the needed behavior.

David J. Brown’s paper addresses managing many variations over time, and allowing some degree of new-runs-on-old, to avoid forcing developers to keep old compilers around when doing bug-fixes to older versions of a program.

To me, the value during development is huge.  We typically had a number of services in development or use, each with an API and several clients. We would only be working on one of the clients at a time, and wanted to avoid “flag days”, where the team had to stop and change the api of the server and all their clients before we could continue. Those were horrible.

Instead, our process became

The only oddity you’d notice was that some versions didn’t ever ship, but would be consumed internally.  You’d see versions like 4.1.3 followed by 4.1.9 if you used one of our team’s libraries.

That was not a solution to every linking problem: indeed, we still had the “normal” problem that each time we got  a new release of a library we call directly,  then we found any breaking changes the first time we compiled. But that’s the same read-the-release-notes problem we had before.  therefore we never need to worry about  “vendoring” or “dependency management”in our development.

Today, we’re once again faced with the incompatible versions problem, in both language- and os-based package managers.

4 thoughts on ““DLL Hell”, and avoiding an NP-complete problem”

This is a text widget, which allows you to add text or HTML to your sidebar. You can use them to display text, links, images, HTML, or a combination of these. Edit them in the Widget section of the Customizer.
Loading Comments...
%d bloggers like this: